You are here: Home / Eat. / Krescendo 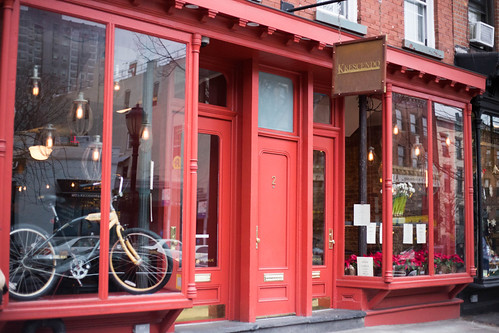 So that cleanse that Asheley and I have been doing is officially over.  We both are feeling a whole lot better about ourselves, which is a nice change from the fat-fest that ensued during the holiday season.  Although we’ve made it a personal goal of ours to try to be a little more health-conscious overall for the start of 2013, we had to celebrate the end of our cleanse with a little indulgence!

This past Sunday we headed into Brooklyn to eat at Chef Elizabeth Falkner’s new restaurant, Krescendo, which just opened a couple months back.  Chef Falkner had previously already made quite the name for herself as chef/partner of the popular Citizen Cake and Orso in San Francisco, but lucky for us, decided to leave the West Coast and set up shop right here in Brooklyn.

Chef Falkner has become quite recognizable over the past several years, making various TV appearances on Top Chef and Top Chef Masters, two different seasons of The Next Iron Chef competition, and a smattering of other culinary shows.  I’ve always been quite intrigued by the dishes she came up with on The Next Iron Chef.  She was a solid contender on both seasons and consistently brought great food to the judges table.  And although she previously carried the stigma of only being a tremendous pastry chef, Chef Falkner quickly proved that she’s more than just cakes and ice cream. 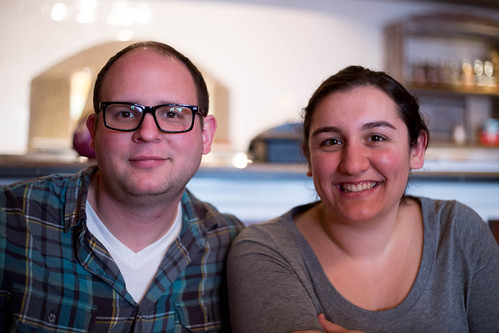 The best meals are often shared with awesome people.  You’ve seen this couple before… our good friends Tyler and Ashley, who are actually engaged to be married this upcoming summer.  Asheley and I are so excited for them.  And little known fact:  My Asheley and Tyler’s Ashley share the same birthday!  Now you know. 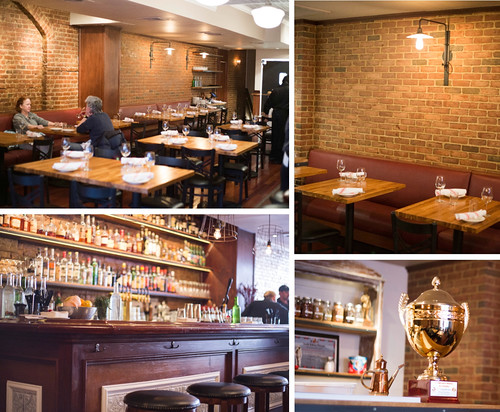 As you walk in, you can’t help but notice the massive, glistening trophy sitting on the ledge of the open kitchen, which Chef Falkner recently won at the Caputo Cup in Naples, Italy.  What is that, you ask?  It’s known as the World Pizza Championships, and her Finocchio Flower Power Pizza took 1st place in 2012 (and yes, it is on the menu).

The star of the interior though, the gem that really catches your attention, is the bedazzled wood-fired oven imported from Naples. 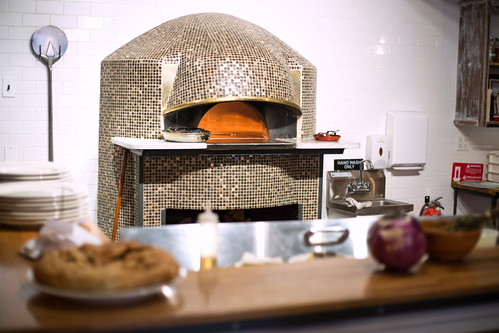 And if you are lucky, you might even have Chef Falkner making your pizza like we did. 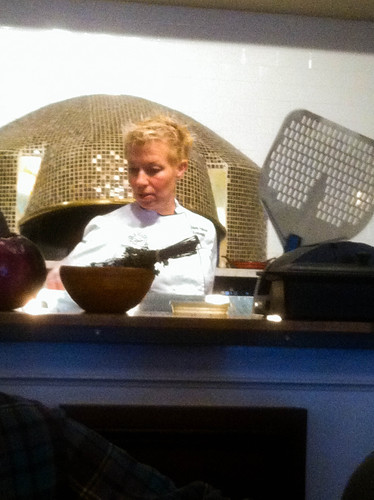 The menu at Krescendo features several appetizers and salads, a whole page of 12″ pizza offerings, and although they weren’t offered on the lunch-time menu we received, various pasta dishes. 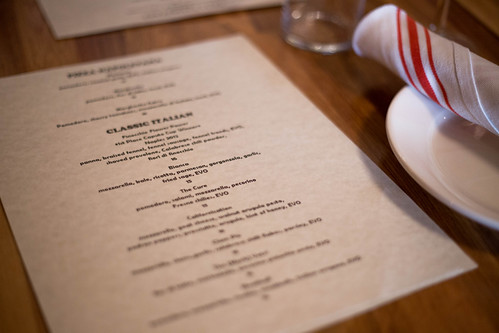 We started with the Black Garlic Knots, which are your typical knots served on top of a flavor-packed black garlic tapenade.  Although priced on the expensive side ($7 if I remember correctly), the black garlic tapenade was a unique upscale twist on the pizzeria classic. 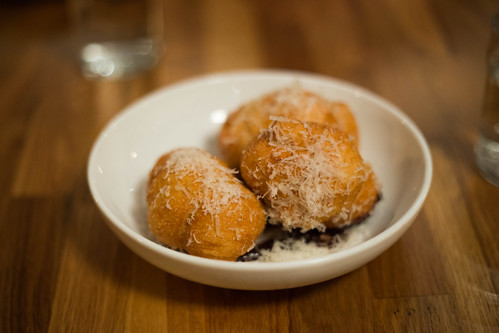 We split the first two and then all four of us stared at the last one… who’s gonna get it?!  The boys won out this battle. 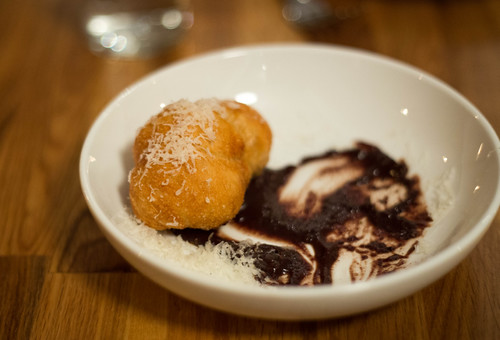 We also shared an order of the Arancini con Pesto di Prezzemolo: three little saffron rice balls served with a parsley-pistachio pesto.  Again although on the expensive side (I think it was $7 or $8), these arancini had a perfectly crispy exterior and the pesto was really bright and flavorful.  I’m not a big fan of a mouthful of parsley, but Falkner used it sparingly for just a pop of freshness. 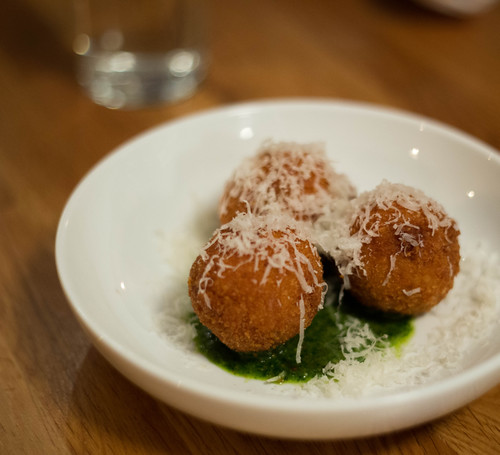 Asheley and I agreed that the perfect arancini would combine Chef Falkners crispy exterior with the interior from the ones at Faicco’s in the Village.  But I also like the little surprise twist found inside the rice balls at Krescendo:  a burst of melted cheese stuffed into the center: 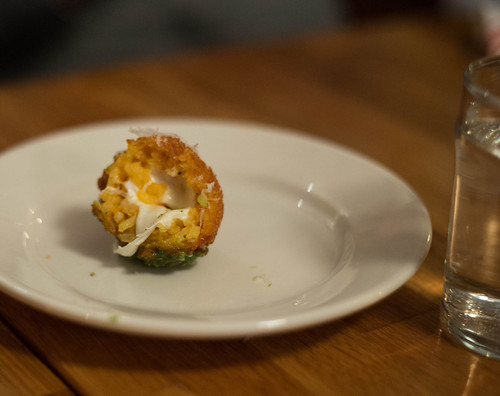 Onto the real reason we were here: the pizza.

Asheley ordered the Californication pie, which I cleverly re-named the David Duchovny pizza (the server laughed… Asheley had no idea of the TV reference).  I digress.  The pizza, which could be an ode to Chef Falkner’s West Coast past, contained Mozzarella, Goat Cheese, Walnut Arugula Pesto, Padron Peppers, Prosciutto, Arugula, and a hint of Honey.  What really made this pizza sing was that touch of honey.  Just that little pop of sweetness, along with the peppery fresh bite of the arugula, was really fantastic. 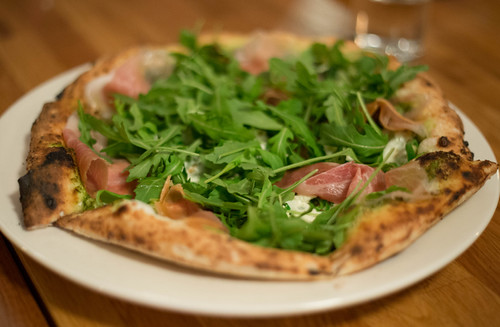 Everyone at the table agreed that the pizza I ordered, the Bianca, was the clear winner of the day.  Not your average “white pizza”, Chef Falkner’s sophisticated version included the usual Mozzarella, Ricotta, Parmigiano, but also brought along some unique friends to the game: Gorgonzola, Fried Sage, and Crispy Kale.

Let’s get one thing straight: I almost didn’t ordered this pie because I loathe blue cheese.  I am happy to report though that you don’t really even taste  “gorgonzola” in this pie, which speaks to Chef Falkner’s ability to expertly balance flavors. 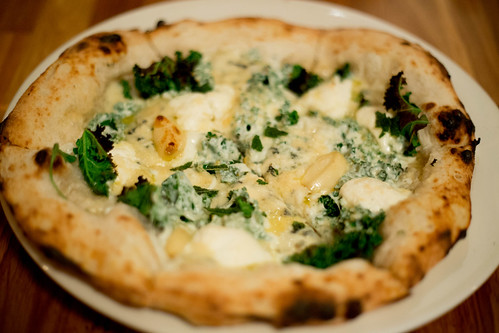 Here’s an up close look at the dough, which had an appropriate amount of charred crust that led to a light and fluffy interior with just the right amount of chew. 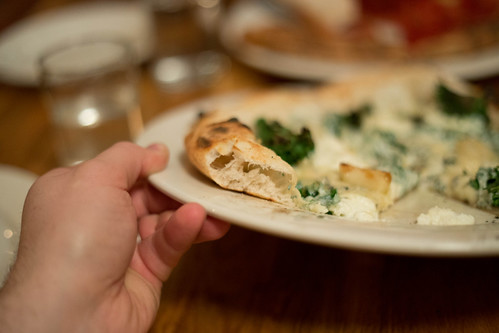 Tyler ordered the classic Marinara pizza, which is just your basic Pomodoro, Roasted Garlic, Olive Oil, and Sicilian Oregano.  The sauce was slightly sweet, which I personally love.  The only thing with this pizza is that the garlic was not roasted completely, which to anyone who has experienced the luxury of  roasted garlic knows, is a bummer.  Also, the bottom crust of the pizza didn’t have the same amount of crispy foundation that the rest of our pizzas had, which maybe was due to the presence of sauce?  Not sure about that one.  But overall, it was still enjoyable. 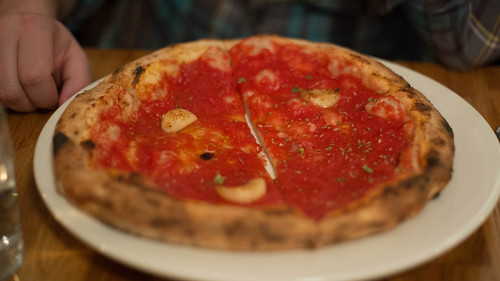 Ashley was really excited about her choice, the Clam Pie, with Mozzarella, Clams, Garlic, Calabrese Chili Flakes, and Parsley.  The danger of clams on pizzas is that they can often become overcooked and unpleasantly chewy.  However, with good technical execution, like was the case here with Chef Falkner, a clam pie can really be delicious. 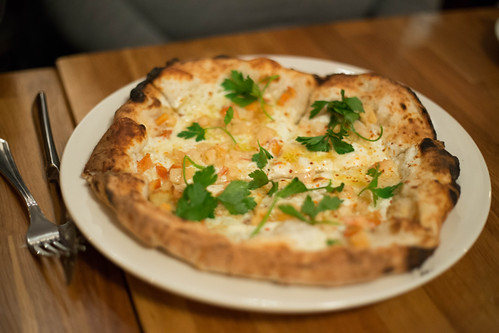 We couldn’t not get dessert.  It’s Chef Falkner!  The two desserts being offered at lunch time were explained to us by a server, and Asheley was really excited by the first one that was explained (but I can’t remember what it was called).  It was something about espresso, chocolate, and mousse.  However, what came was what I can best describe as an Espresso Granita.  It literally just tasted like an espresso ice with layers of whipped cream.  It was unfortunately disappointing and really did not even get eaten. 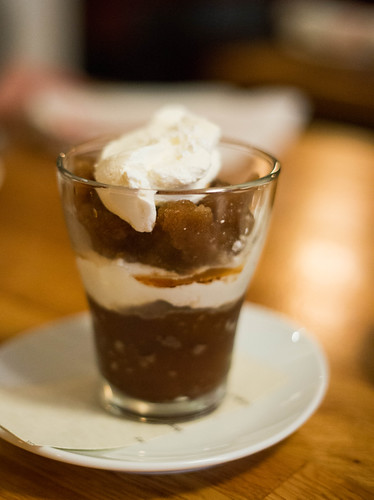 However, the Apple Crostada with Cherries was absolutely incredible.  The buttery and rich pastry dough was some of the best I’ve ever had, and the apple filling with little bursts of cherry surprises was divine. 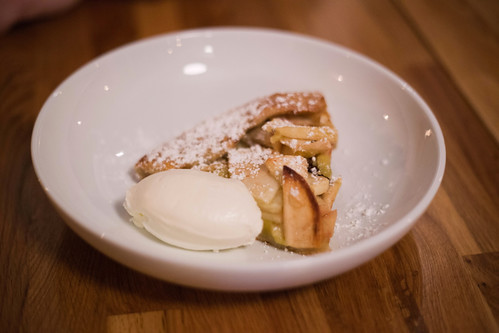 So, some ending thoughts about Krescendo…

Price point: it is pretty much on target I think for the pizzas.  The pies were about $16 each, except for the marinara which was like $10 or $11.  The apps were way on expensive side ($7 for 3 garlic knots/rice balls seems like a little too much to me).

Food: Sophisticated pizzas, solid apps, and some really fantastic desserts.  It was a really enjoyable meal that I would happily eat again.

Service:  This was the most disappointing aspect of our visit to Krescendo.  Although the waitstaff was definitely much better than what other earlier visitors reported, the servers are still not quite locked in.  On the positive side, water glasses were refilled regularly and all the staff were welcoming and courteous.  On the flip side, we had to call over random servers to clear our plates and ask about dessert when ours went M.I.A.  And it wasn’t because they were low-staffed and overly busy… there were lots of staff standing around not really doing anything.  They definitely could have been more attentive.

Also, just another little glitch: When ordering the apps we specifically asked if they were shareable, to which the server enthusiastically said yes.  However, there was four of us and only 3 knots/rice balls to an order.  Typically, servers mention that when a customer specifically asks if they are shareable.  Trying to share 3 items among 4 people is a little complicated.  Not a huge deal, but definitely something worth mentioning.

But listen, let’s give the servers a break.  The place just opened a couple months ago and they are still getting their feet wet.  I have had much worse service at places opened for a much longer amount of time.

Meal Duration: Getting the food out of the kitchen seemed to take longer than expected.  The whole meal took about an hour and forty minutes, which is a bit long… especially when there was barely anyone in the restaurant (we went at 2 p.m. on a Sunday).  Again, hopefully this will improve with time. 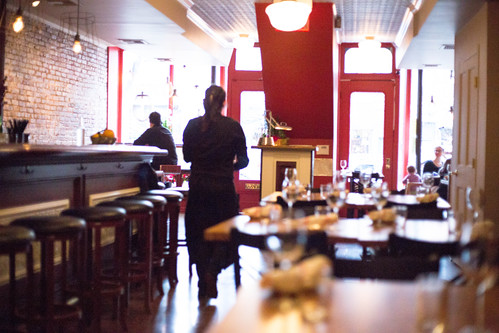 I’m really hopeful for Krescendo.  They have solid food and a chef that is genuinely passionate about what she puts out.  Although not busy while we were there on a Sunday in mid-afternoon, I was told by Chef Falkner via twitter that it was packed that night.