I meant to write about this over a month ago… but then life got all crazy with wedding plans (3 weeks to go!) and Shared Appetite was also getting a brand new design.  So, better late than never… here is a recap of the Grand Tasting put on by the Lucky Rice Festival in NYC that Asheley and I had the chance to attend.

I’ve never been to a grand tasting before.  I’ve always heard of them and thought it would be cool to go… but then you look at the price tag and that’s normally enough for me to say “uhm, no thanks”.  That was exactly the case when I first heard about the Lucky Rice Festival Grand Tasting… but then one of those fancy discount deals arrived in my inbox…  it was an offer I couldn’t refuse. 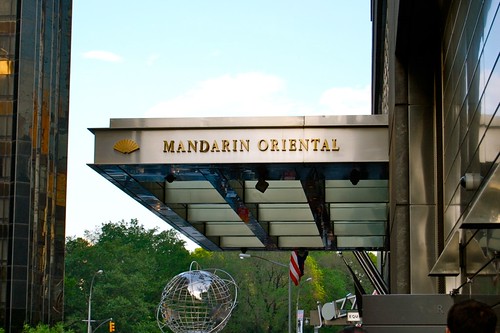 The walk-around Asian food tasting was held in the super luxurious Mandarin Oriental Hotel grand ballroom, with views overlooking Central Park.   The VIPs had an arrival time of 6 p.m., allowing those with deep pockets to get first dibs on the food and a meet and greet with the participating celebrity chefs.  Us general admission folk had to wait until 7 p.m. to enter… and Asheley and I were one of the first in line.

As we entered the ballroom, the space felt pretty large and it was relatively easy to navigate among the  crowd of “VIPs” already inside.  This was the view of the ballroom right when we arrived (7:05).  If it already looks like a lot of people were there… it was about to get 10 times worse.  It quickly became crazy overcrowded as hoards of hungry (but well-dressed) vultures packed the ballroom. 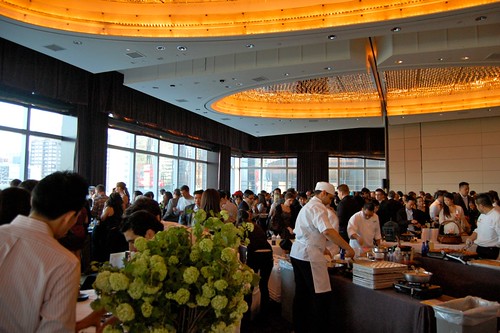 Despite the crowds, we were still super excited to taste the foods of participating celebrity chefs, including Masaharu Morimoto, Ming Tsai, Susur Lee, Jehangir Mehta, and Todd English.  In addition, they apparently had star chefs from Hong Kong, Macau, and Taiwan presenting food at the tasting, so our bellies were ready for massive consumption overload.  The topping on the cake: the evening promised several drinking opportunities, including various wine, sake, champagne, and cocktail tastings.

As we were walking around I spotted past Top Chef contestant and chef/owner of Social Eatz, Angelo Sosa: 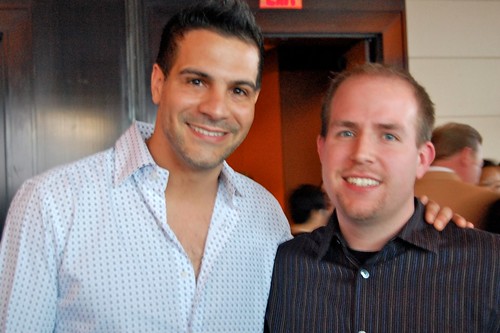 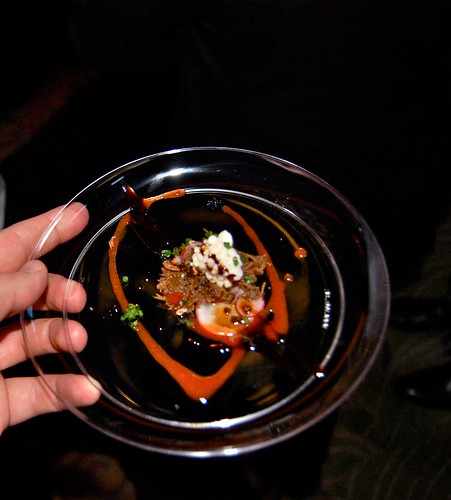 We loved it so much, we braved the long lines waiting at Chef Tsai’s table a 2nd time… 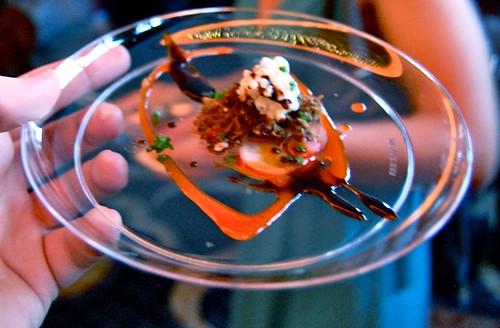 A very close second for best food of the evening came from Buddakan’s Chef Yang Huang: Edamame Dumplings with Shallot-Sauternes Broth.  The edamame puree within the dumpling was so smooth, creamy, and full of flavor.  It still kinda blows my mind just thinking about it… 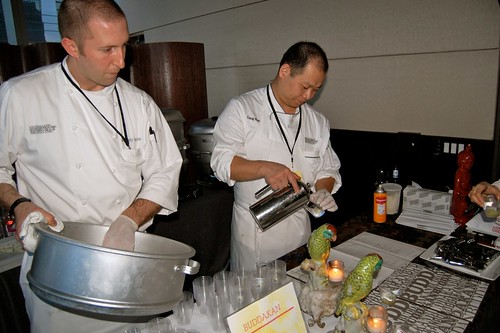 We not only came back for seconds, but thirds as well 🙂 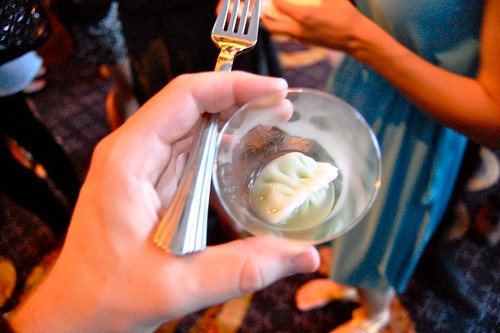 The restaurant that probably ran out of food the fastest was Morimoto, which makes sense considering their placement right in front of the entrance and the big Iron Chef name attached to the restaurant.  Chef Masaharu Morimoto served Spicy King Crab at the event, which was excellent but in all reality not as memorable as the two dishes described above. 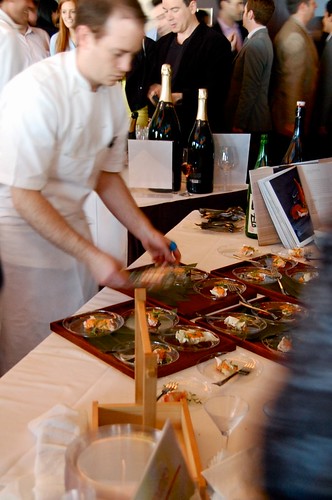 Good thing we grabbed our taste of Morimoto’s food as soon as we arrived.  They ran out quickly…  when we fought our way through the crowds to get back to his table a little while later, they were already packed up and gone!  But here’s a peak at his King Crab dish: 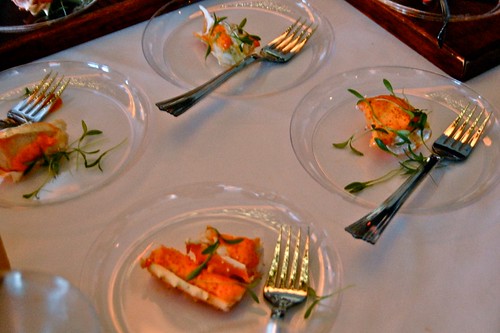 Oh, and added bonus, Chef Morimoto was still at the tasting when we walked in.  Asheley got up close and personal with the Chef: 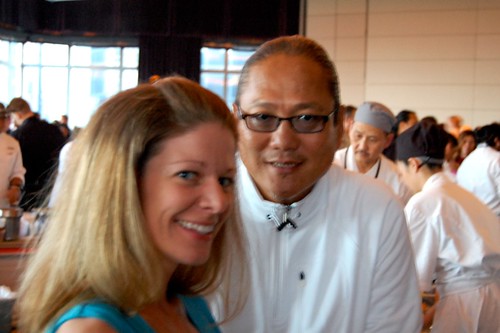 Probably the most fun food of the evening were these Kanom Buarng-Yarn Thai Tacos, from Chef Ian Kittichai of Ember Room. 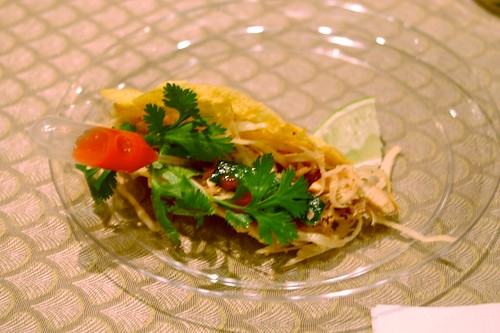 Yes, that is a mini pipette of delicious sauce sticking out of the taco, which is where the fun came in…  oh yea: 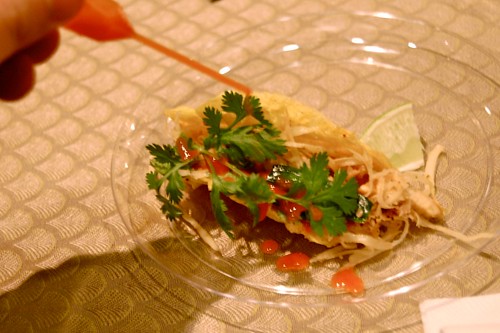 Another solid dish was Chef David Thompson’s light and refreshing Cured Hamachi Amberjack with Lemongrass and Lime on Betel Leaves. 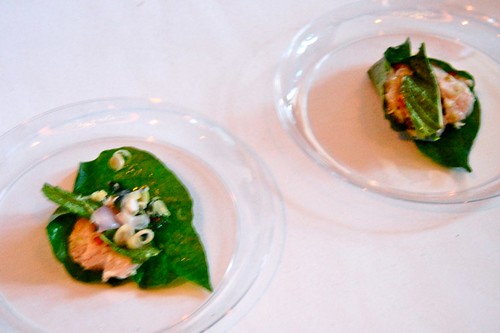 Chef Susur Lee, who is no stranger to the celebrity chef life (he tied Bobby Flay in an episode of Iron Chef and finished 2nd in Top Chef Masters), presented his  Hong Kong Shrimp Taro Toast.  It was good, but not “holy crap where have you been all my life” good. 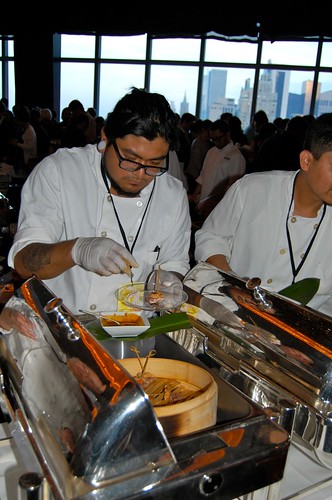 In case you were wondering, that guy isn’t Susur Lee.  Anyway, here’s the dish: 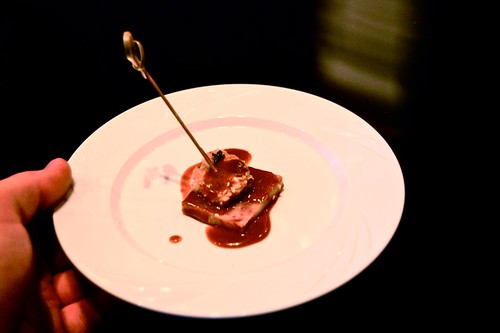 We made our way over to Plaza Food Hall’s table.  I’ve never eaten at any of Todd English’s restaurants before, so I was excited to try his food at the event… and to my amazement, I was totally disappointed.  His dish, Stuffed Rendang Meatballs with Quail Egg and Rendang Sauce, tasted like a ball of dense meat with an overcooked egg in the middle.  Fail. 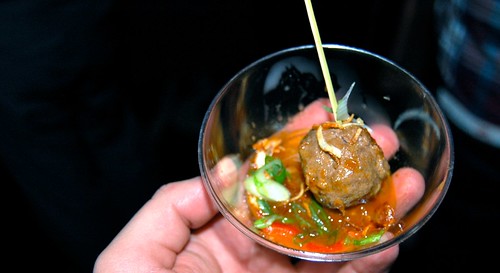 Chef Aliya of Leekong of Junoon served up Lotus Root 3 Ways  and a little shot of Strawberry Lassi.  The lassi (a.k.a. smoothie) was so delicious and a perfect cool refreshment in a ballroom that was getting quite cramped. 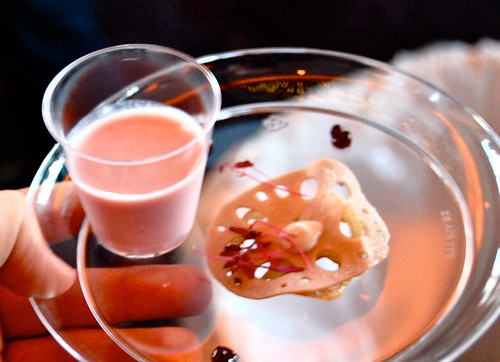 The Snapper with Dashi and Trout Roe created by Gramercy Tavern Chef Michael Anthony was super fresh and superb, but was eaten with such gusto that I forgot to take a picture of it.  Oh well, you can just look at the picture I took of him instead: 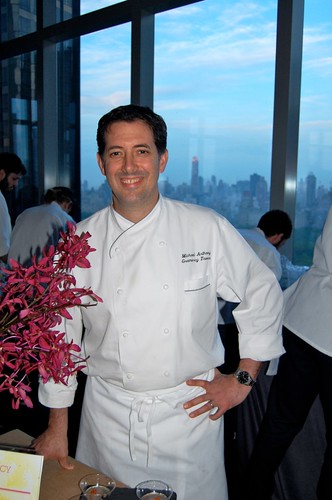 The Beef Tataki with Kinpira Gobo I tasted from En Japanese Brasserie Chef Hiroki Abe missed the mark for me.  The beef was smoked with cherry wood, but it tasted way too smoky and just had a plain weird flavor. 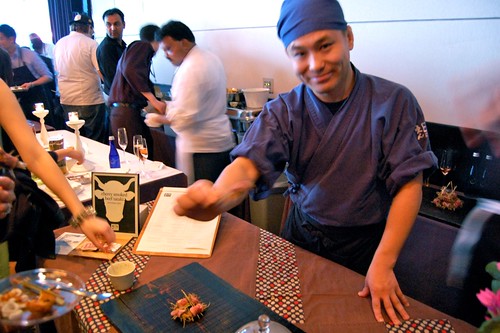 He gets high marks for presentation though… check out the release of smoke: 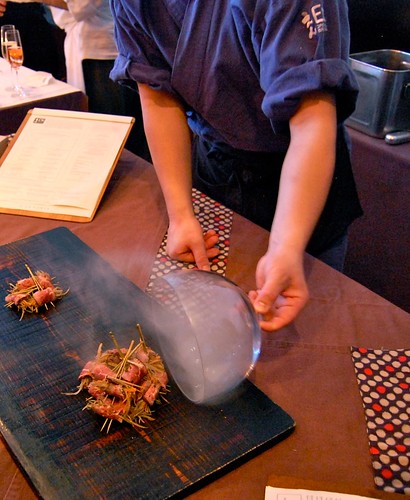 The fact that I don’t even remember eating this Crispy Chinese Sausage Rice Cake with Broken Chili Sauce from The Hurricane Club Chef Craig Koketsu probably means that it was good, but less than memorable. 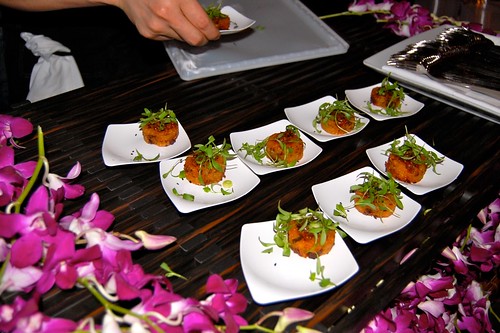 Chef Simpson Wong served Hakka Pork Belly with Taro Tater Tot.  My piece of pork was delicious, while Asheley’s was pretty much all fat.  The taro tater was too dense and hindered the dish a bit. 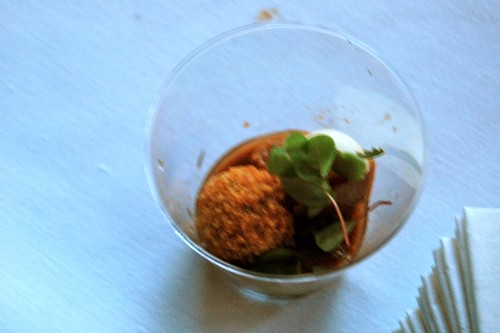 Bosie Tea Parlor definitely created some of the most different macarons I’ve ever tasted.  I appreciated their unique flavor offerings: caramel miso, rose-jasmine, sesame, wasabi, and chai-chocolate.  Some were really good!  However, I can’t say with any certainty that they were all flavors that I would ever want to see again in a macaron. 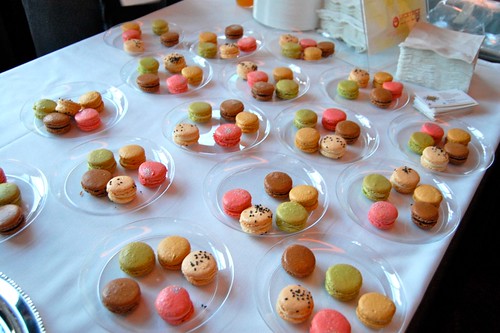 The last thing we had before we left the event was this super delicious drink whipped up by the Bombay Sapphire East table: 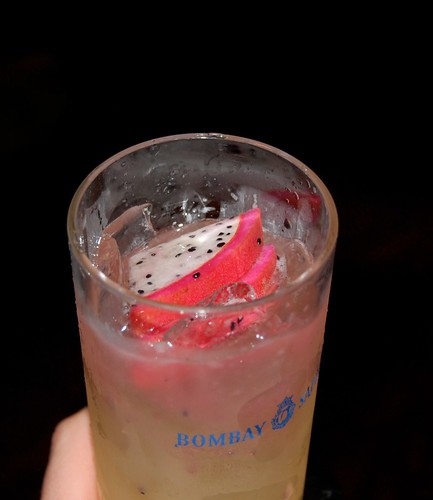 They even included the recipe for the drink:

The number one question I’ve tried to figure out since attending the Grand Tasting has been… “was it worth it?”  And by that, I mean, was it worth the $99 per person price tag we paid (and that was with the email discount.  Regular price was like $160).  To help me answer the question, I came up with a pro/con list: