You are here: Home / Eat. / The Big Surprise at the Big E

This past weekend my fiance and I ventured up to the Big E, held in West Springfield, MA.  As a child growing up on Long Island, I’ve been to “fairs” before. Held in big parking lots, there were several rides, carnival games, the typical carnival food, and maybe some small show or animal petting exhibit.  The most memorable and biggest fair I can remember attending was held in the parking lot of Nassau Coliseum arena.  Well… comparatively, that “fair” is a mere insignificant freckle on the pinky toe of the left foot of the Big E.  The Big E is quite simply massive.

The Big E is an autumn tradition in New England, and it is the largest fair in the entire northeast.  There are two exhibition centers full of different animals, another two or three exhibition centers full of crafts and other items to buy, and a statehouse mansion full of native foods and merchandise for every New England state.  Oh yea, there are also 2 stages for pretty big shows, including concerts by Blake Shelton and Reba McEntire this year, as well as a big top for the three times daily circus.  The carnival food kiosks were endless.  Literally… endless.  And yes, there were enough rides and carnival games to make any parent go broke.  Crowds were unreal.  It was like Times Square during the holidays: lots of people walking at a leisurely pace.  But let’s talk about what we are all interested in:  how was the food?!

Most of the food at the Big E is your typical unimpressive carnival fare.  They deep fry anything and everything.  I seriously saw “deep fried butter balls” and “deep fried kool-aid”.  Seriously!  However, there was one morsel of culinary delight among all the normal, expected carnival food I ate.  No, it wasn’t anything gourmet and the dish definitely didn’t boast any locally grown produce.  It was the Craz-E Burger.  This isn’t any ordinary burger.  Beef burger, crispy bacon, melted cheese, all nestled between… get this… a buttered and grilled Krispy Kreme glazed doughnut!  Half of you right now are probably disgusted by the thought of  a) how could this possibly be edible, let alone taste good and  b) how could I actually eat this 1500 calorie monstrosity.    But then there is the other half of you:  intrigued, curious, and maybe even dare I say craving one of these delicious little morsels of heart attack heaven.  Trust me, once you try it, you will not regret it. 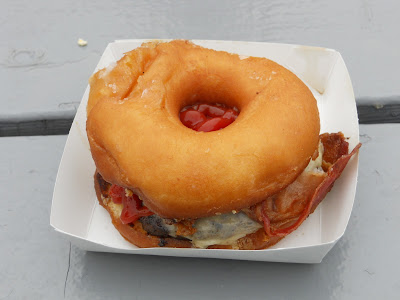 I was prompted to order and eat this burger on a dare.  Not wanting to disappoint, and personally curious about the burger, I happily obliged.  The taste combination was quite unexpectedly “wow” good.  I don’t know why it worked, but it did.  The sweet glaze of the doughnut paired perfectly with the salty crunch of the bacon.  Some how, some way, all the ingredients worked in harmony for this burger.  I don’t know how this burger was thought up and who thought it would be a good idea to put a burger on a grilled Krispy Kreme, but whoever you are and for whatever reason you did this, I thank you.