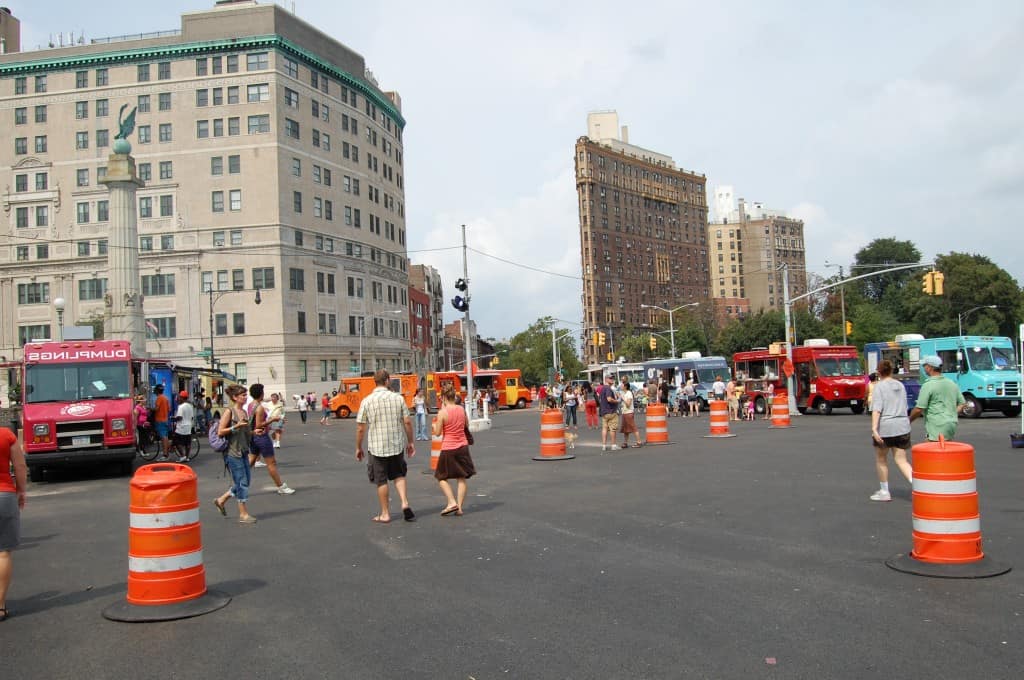 The next big thing to hit New York’s food scene?  Gourmet food trucks, and the invasion is already well underway.  A movement that began on the West Coast, California is already accustomed to the gourmet food truck scene and they embrace it with open arms.  Okay New York, before you start thinking half-cooked pretzels, nuts-for-nuts, and other abysmal food cart atrocities, think again.  Today’s food truck is not your ordinary sidewalk vendor. These gourmet food trucks cook up fresh, high-quality ingredients.  Some food trucks even sport menu items with local and/or organic produce.  Menus are much smaller compared to that of a restaurant, as the trucks focus on limited but creative dishes that run the scope of ethnic and fusion cuisine.  Often times, successful food trucks have a very creative, unique niche.  Several food trucks fuse together different types of food, like Mexicue’s blend of BBQ and Mexican fare, while others (like Van Leeuwen’s Vanilla Ice Cream) take old time favorites to a brand new level of culinary genius.

Social media has played an integral part in the success of the food truck boom.  With the help of social media like facebook and twitter, customers can find their favorite food truck with a couple clicks (or taps for you touch screen folks).  Also, many food trucks utilize telephone hotlines that you can call to find their location, and some trucks post their weekly schedules in advance on their websites.Why food trucks?  From a business point of view, there is less overhead.  No rent, smaller staff, and a focused menu.  From a customer standpoint, these trucks provide fresh takes on plates that you would normally pay much higher prices for in a restaurant sit-down setting.  Also, many menus will change and adapt to include special in-season ingredients or just to meet the chef’s fancy for that day.  In addition, there is something just plain fun about ordering from a truck, while at the same time getting food that delivers on quality and taste.  The food  is often so good that many trucks have developed a cult-like following.

Personally,  I actually got “hooked” into the gourmet food truck scene by watching television.  Food Network’s The Great Food Truck Race, hosted by Tyler Florence, just finished airing their second season.  Highlighting different trucks from across the nation, the show gives a glimpse into how these trucks and chefs operate.  This season, a NYC food truck called Korilla was on the show.  Wanting to try the food I saw them prepare on t.v., a blend of Korean BBQ, Kimchi, and Burritos, I ventured out and stumbled upon this amazing new world of food.  Let me tell you, it is pretty darn amazing!

Every time I head into the city (about twice a month at this point), I make it a point to hunt down a different food truck to try out.  The food at many trucks have been a hit, with an occasional miss along the way.  Stay tuned in the upcoming weeks for my reviews of the food trucks I’ve visited.  Want more information now about NYC Food Trucks?  Check out the official New York Food Truck Association website, which has links to numerous NYC trucks.  While you are there, sign their petition to support the food truck scene in NYC!

UPDATE:  Here are some of the trucks I’ve really enjoyed so far:

Van Leeuwen – The best vanilla ice cream I’ve ever had

Rickshaw Dumpling – a nice selection of different kinds of dumplings

Mexicue – I love Mexican food.  I love BBQ.  Blending them together.  Ohhhh man!