You are here: Home / Bread + Friends / How To Make Flour Tortillas 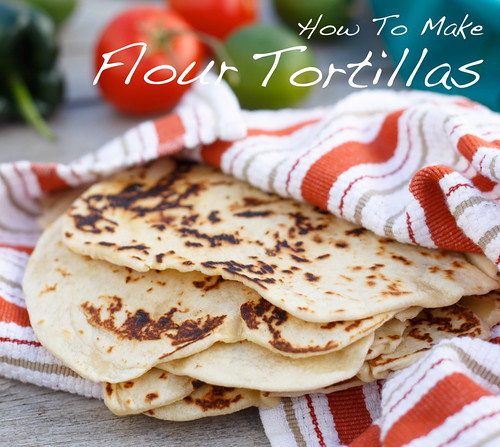 Asheley’s new thing is wanting to do a Tough Mudder, a 160-mile bike race in Ohio this summer, and various triathlons.  She spent the other day looking up information about wet suits and bike gear.  Oh, and she just signed up for cross fit.

Honestly, I don’t get “the enjoyment factor” in all of this.  But I’m happy because she’s super excited about it, and that’s really all that matters.  Asheley loves these types of  athletic challenges.  Me?  Well let’s just say making tortillas has been the extent of my extreme sporting this month.

Didn’t I just make corn tortillas?  I know, I know.  Those were really great.  And ridiculously easy to make.  But the flour variety are definitely my tortilla of choice.  Asheley’s too.  No, they aren’t as healthy.  And it’s hard to find any redeeming nutritional value about them.  But gosh they’re good, so leave me alone 🙂 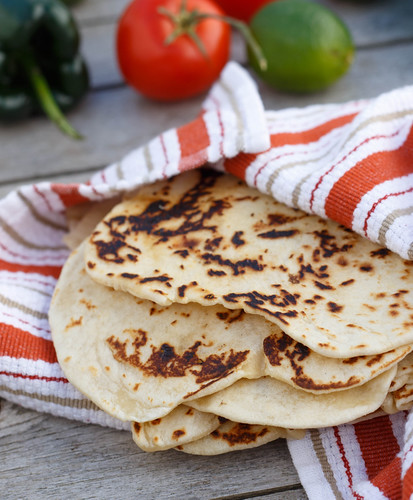 Some flour tortilla recipes call for baking powder.  Some don’t.  It acts as a leavening agent, giving the tortillas a little bit of puffy volume.  Sans baking soda, it would be a much flatter tortilla.  I’m not sure if either is right or wrong.  From what I’ve read, adding baking powder is more of the Tex-Mex version, and without is more authentic to Northern Mexico. 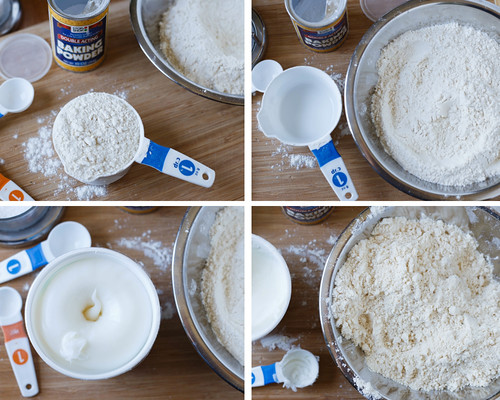 Lard.  It’s a fun word, isn’t it?  It just makes me think light, fluffy, airy…  No, not you?  I’ve actually never worked with lard before, so this was an exciting first.  I’ve heard you can find it next to the Crisco in the supermarket, but I actually found mine in a Mexican market right down the street from me.

If the thought of working with lard freaks you out, I’ve heard you can substitute equal parts vegetable shortening, like crisco.  Some recipes avoid the whole lard/shortening thing all together and use oil.  Lard seems to be the standard though, so I figured I might as well start there. 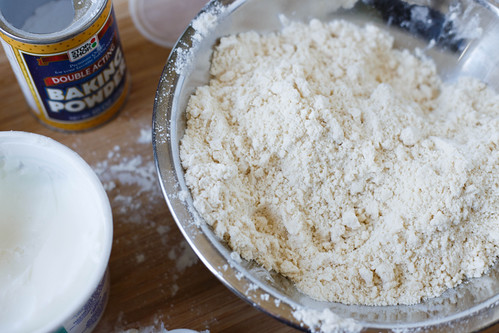 You want to cut in the lard until the mixture resembles coarse crumbs.  A pastry blender will do the trick, which would have been nice if I actually had one.  Good thing fingers work just as well. 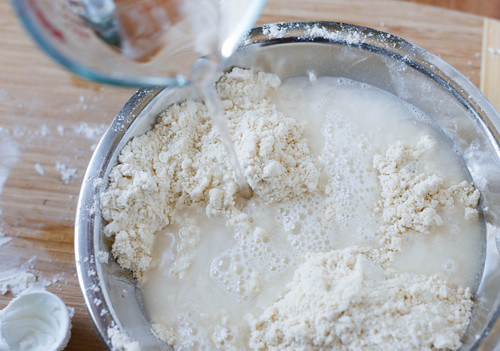 Make sure that the water you add is very warm.  Not boiling, but definitely pretty warm.  Combine that until it comes together to form a dough. 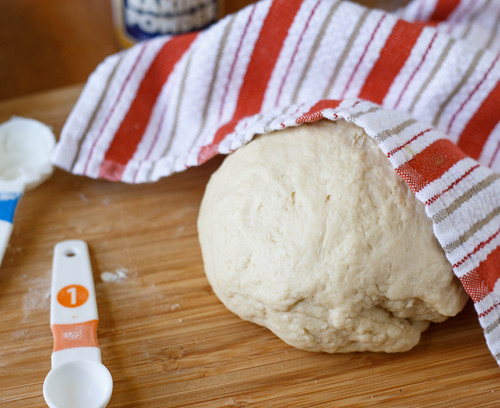 Knead the dough until it’s not so sticky, which will take a couple of minutes.  I counted that as my workout for the day.  Killing two birds with one stone.  That’s how I roll.

Cover up the dough with a kitchen towel and let it rest for at least 20 minutes.  That will give the gluten some time to develop.  If you need to leave it for a bit longer, that sounds good to me too. 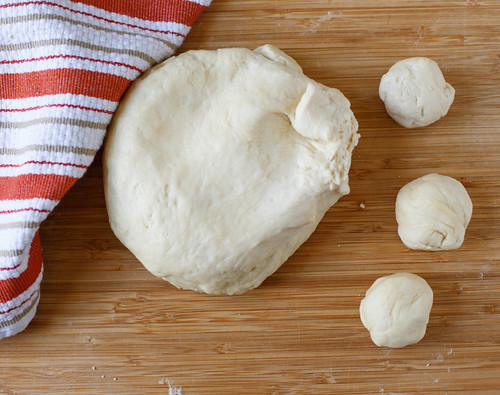 Pinch off the dough into ping pong-sized balls.  They should yield around 5-7″ tortillas depending upon how thinly you roll them out.  If you want larger tortillas, make the dough balls a bit larger. 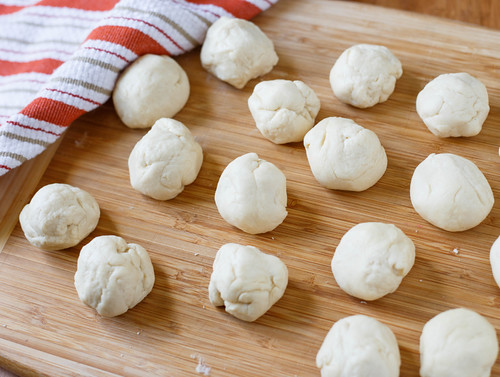 At this point, cover up the dough again and let it rest for around 10 minutes. 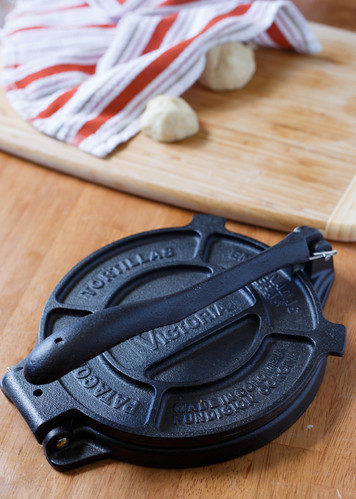 It’s rolling time.  You’re not going to get a perfect circle, which is actually better in my mind.  Imperfectly shaped tortillas scream homemade deliciousness.

You can most certainly just use a rolling pin.  I just got this awesome tortilla press

though, so naturally I had to take it for a test drive. 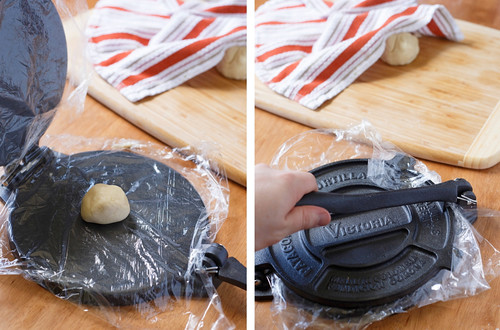 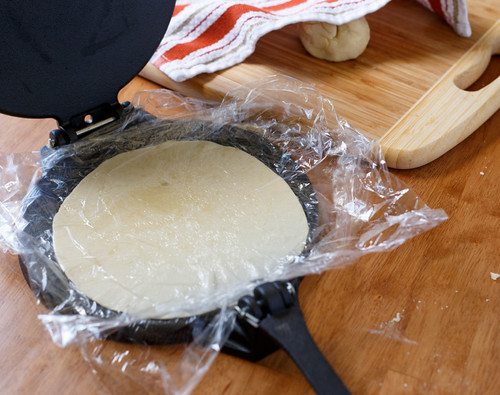 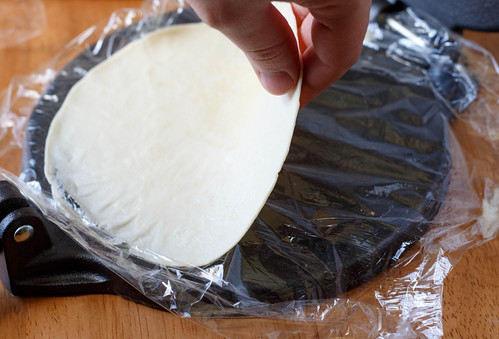 The thickness of the tortilla is completely up to you.  Some people like them super thin, while others prefer a little volume to them.  It’s personal preference really.

I found that using just the tortilla press made them a tad too thick for my liking, so after coming off the press, I gave it a quick massage with my rolling pin. 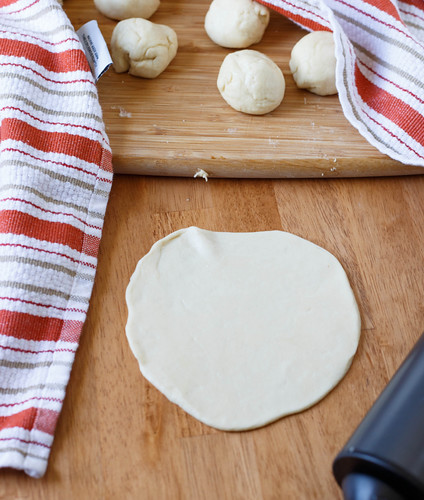 It helped give that imperfect circle look as well 🙂

As your beginning to get your roll on, preheat a heavy, dry skillet over medium/medium-high heat.  You want to get into a rhythm of cooking one tortilla while rolling out another. 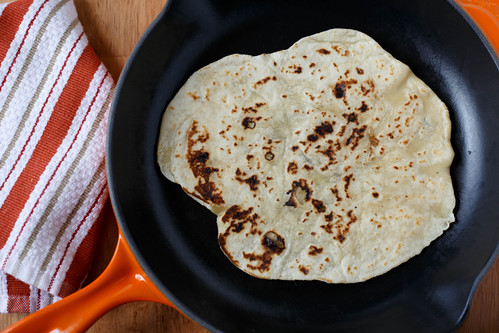 You know the skillet is the right temperature when you hear a faint sizzle sound as the tortilla hits the pan.  30-45 seconds per side should do it.  Just keep an eye on the pan because the tortillas can go from browned to burnt pretty quickly.

You will probably have to adjust the heat as you go to keep your pan in the optimal heat zone.  My first couple tortillas didn’t brown as well as I would have liked because the skillet wasn’t quite hot enough.  Some browned too quickly though as the pan started getting really hot. 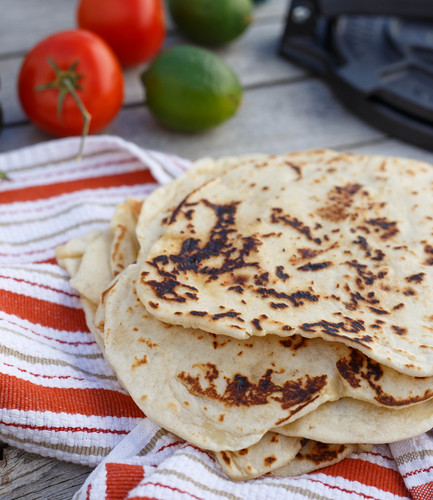 Stack your prized possessions on top of each other in a kitchen towel to keep them warm.  If you aren’t planning on devouring them in a timely fashion, you can let them cool and store in the refrigerator for several days.  Just reheat them wrapped in a slightly damp paper towel on 1/2 power in the microwave or wrapped in foil in the oven until warmed through.

Do I even need to tell you how to use these?  You know.  You know.