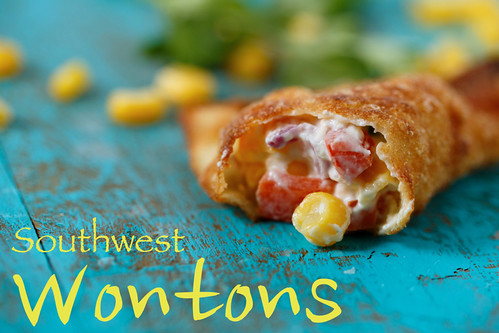 I first made these wontons a couple of years back for a little happy hour I threw for friends from work.  I remember enlisting the help of my good friend Steve to be my sous chef to make sure everything was ready and done on time.  The first task he tackled was filling and wrapping the wontons.  We both had never done it before but he decided, very stereotypically, that since he’s Asian, that skill must have been inherently imbedded somewhere in his DNA.

Steve was totally right.  He filled and wrapped the first wonton with careful approach.  After that, he was like a wonton savant.  We both had no idea how he was prepping them so fast.  We laughed and laughed about this new-found career opportunity… that is, until he realized that now every time I make these southwest wontons, he’s in charge of filling and wrapping them.

Anyway, I think you will really love these Southwest Wontons.  They are an insanely addictive party snack and after making them for your next friendly get-together, will definitely up your “cooking street cred”. 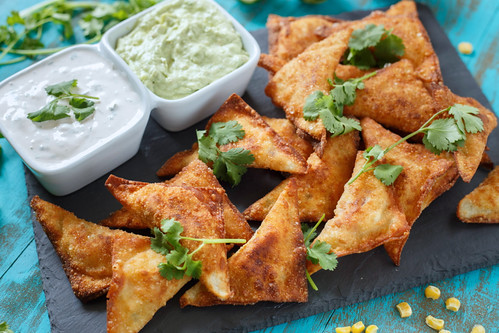 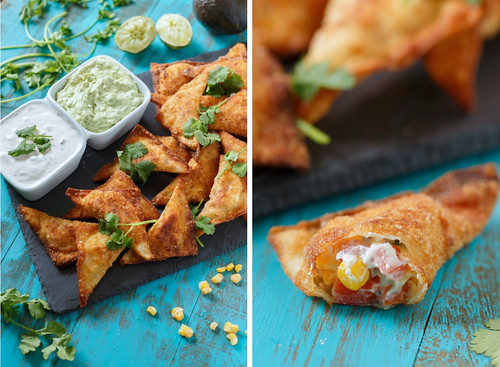 Frozen corn will do the trick just fine.  You can use fresh corn if you’ve got it, but here in New York it’s just not that time of year yet.

That is, of course, unless you’re extremely clever like my friend Sandra from Kitchen Apparel and stash away last summer’s bounty of fresh corn in the freezer for year round use.  I’m totally doing that this year!  And really, if you have the moment, check out her really great blog. 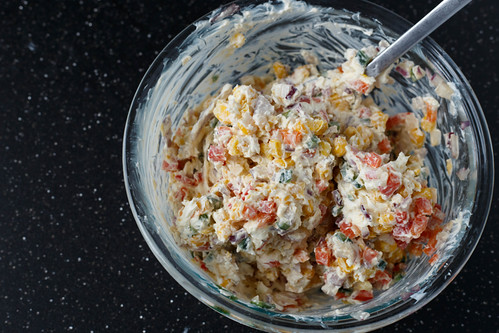 Most supermarkets by me sell these fresh wonton wrappers nowadays.  I usually find them, oddly enough, next to the pre-packaged salad mixes.  I’m not quite sure why, but who am I to question such product placements.  Just look for them in one of the refrigerated sections of your supermarket. 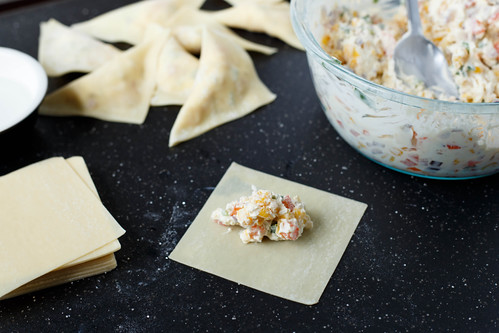 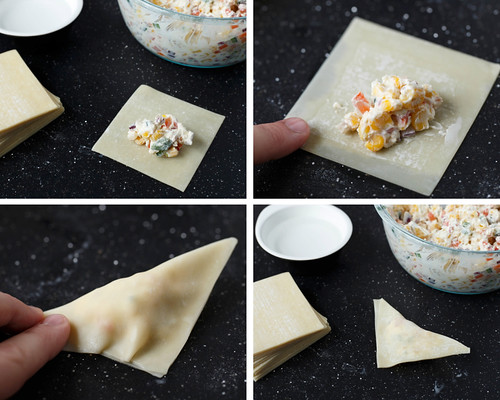 Assembling these little buggers are quite easy albeit a bit of a repetitive, tedious task.  I enjoy it though, and the rewards are well worth it.

Now, listen, I know you.  You’re going to want to stuff your wontons way too full.  That’s like me trying to get myself into a pair of skinny jeans.  It’s just not happening.  Err on the side of under-stuffing.

Dip your index finger in a little bowl of water and trace the perimeter of your wonton.  Fold it over into a triangle and make sure there’s a good seal.  You’d hate to have a wonton leakage accident as they are frying up. 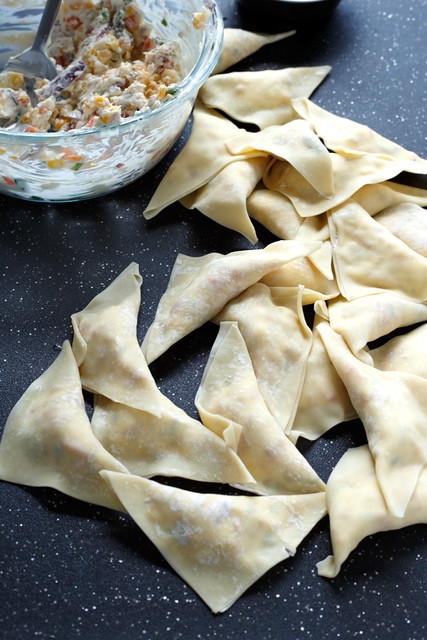 And eventually, once all your filling it used up, you’ll have a glorious sight before you of 30-35 wontons waiting to be fried to crispy, golden brown perfection. 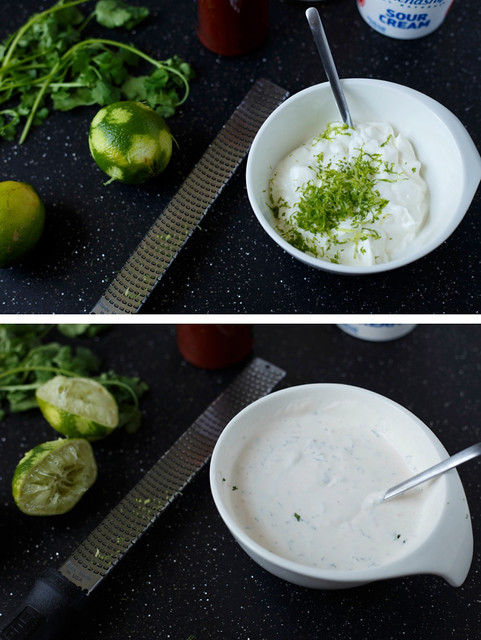 You’ve got two dipping options here.  One’s a bit healthier than the other, if you are concerned about that sort of thing.

Each are really good and I definitely prefer to have both.  When I get bored with one, just switch it on up!  But if you only had time to make one and are forcing me to choose, I’d go with the Lime Crema.  It’s so simple yet so awesome with the wontons: Sour cream is spiked with the zest and juice of a lime, a generous dash of hot sauce, and some herbaceous cilantro.

The healthier Avocado Lime Cream is actually made with greek yogurt.  It’s got that guacamole feel to it because of the addition of lime and garlic.  Pretty darn tasty, and kinda makes you feel better about the fact your dipping a fried wonton into something with some good nutritional value.  Now that’s my kind of healthy eating 🙂 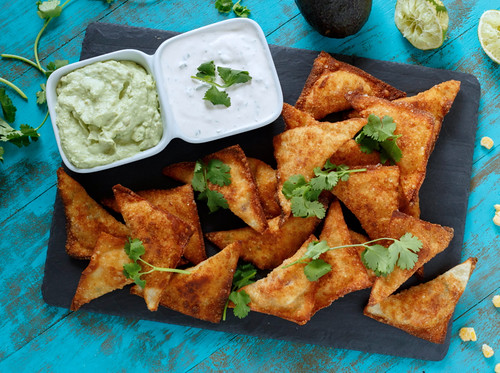 You don’t need a deep fryer for these wontons.  I actually have one and don’t even use it for this.  In fact I’ve never used my deep fryer.  Yet.  I have to get on that.  Hmmm, what can I deep fry…

I digress.  To fry up these wontons, just pour a bit of canola or vegetable oil into a fry pan or skillet.  You need just enough to submerge half of the wonton, so probably about 1/2″.  30-45 seconds per side should do it. 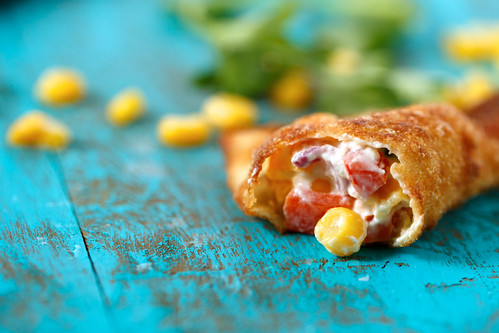 They of course taste best right out of the fryer.  The wonton is nice and crispy, the inside steamy and creamy.

But I’ve also made them a little bit ahead of time before my guests arrive.  All I do then is pop them into the oven to reheat up a bit in a single layer on a baking sheet.  You lose a little tiny bit of the crunch factor, but no one seems to mind. 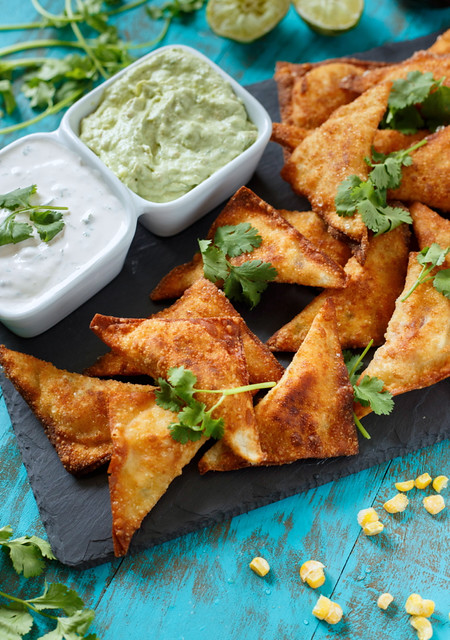 I know I say I love a lot of food (that was a lot of “i”s in that sentence, sorry).  And it’s the truth.  But I really, really love these wontons.  A lot. 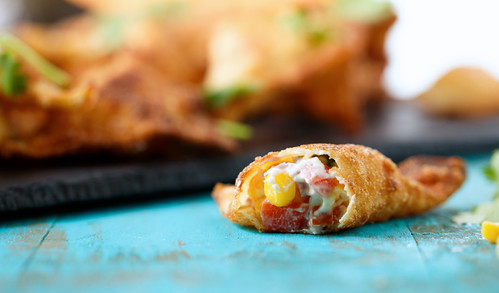 For the Avocado Lime Cream