Every time I walk past Danny Meyer’s Shake Shack in the city, whether it be Madison Square Park, Upper West or East side, or in the Theater District, the line is always ridiculously long.  I have a couple of friends that are Shake Shack addicts, so it’s been on my list of places to try.  However, I never can find it in me to wait that long for glorified fast food.  Well, recently I was in the city with Asheley and two friends to check out April Bloomfield’s hip gastropub, The Spotted Pig.  We were taking a pre-dinner stroll around the Flatiron building and Madison Square Park when my friend casually commented that the Shake Shack line in the park looked pretty small.  It was only about 2 hours until we planned on eating dinner, so a full meal wasn’t an option.  However, being called Shake Shack and all, I figured I could at least take advantage of the short line to try a shake.  I mean, that’s what a place with shake in the title would be known for, right?  Wrong… 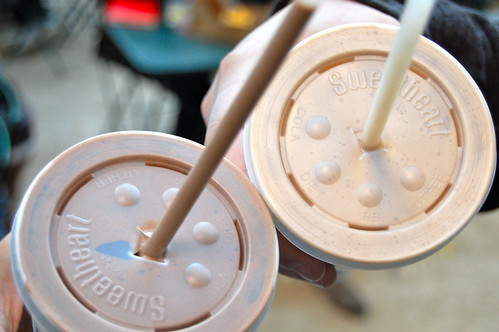 The line was about 10 minutes long, not too bad.  My friend ordered the black & white shake and taking the cashier’s recommendation, I went with chocolate.  In about five minutes, the shakes were ready for pick up.  For $5 a shake, I was disappointed in it’s small size.  I have no problem spending a little extra when the quality of the product is also proportionally higher.  However, this was not anywhere near the case.  The black & white shake was decently average, but the chocolate shake was dismal.  Its artificial chocolate flavor left a displeasing aftertaste in my mouth.  I didn’t come close to finishing the shake, and anyone that knows me understands the severity of that statement.  For me to leave a shake unfinished (or any sweet treat for that matter), it speaks volumes.  I would much rather spend my $5 shake money at Bobby’s Burger Palace.  Flay’s dark chocolate shake is epic and 100% the best shake I’ve tasted in a long time.  It’s super rich, creamy, and decadent.  I dream about that shake.

I spoke about my lackluster shake experience with two friends of mine who are big fans of Shake Shack.  According to them, the shakes aren’t what is special about this place.  Instead, the dessert to order here was apparently  a “concrete”.  A concrete, according to Shake Shack’s menu, is “dense frozen custard blended at high speed with toppings & mix-ins.”   At my friends’ urging, I figured I would give the place another shot… and Danny Meyer is a pretty legendary restauranteur in NYC (Grammercy Tavern, Blue Smoke, and many more).  I needed to at least try this concrete.  Asheley got the Shack Attack, which contains chocolate custard, hot fudge, chocolate truffle cookie dough, Valrhona chocolate chunks, topped with chocolate sprinkles.   I tried their custard flavor of the day: Candy Cane Crunch, mixed with chocolate truffle cookie dough and Valrhona chocolate chunks.

Wow!  Is this the same place that served me those disappointing shakes?   What a difference between their miserable shakes and luscious concretes!  Their custard is rich, dense, creamy, and super flavorful.  The Shack Attack was a little over the top decadent for my tastes, but still very delicious and enjoyable.    The Candy Cane Crunch custard was simply awesome.  I would highly recommend the chocolate truffle cookie dough and Valrhona chocolate chunks as well.  It added just the right amount of chew and crunch texture to the custard.  I will definitely be back for another concrete soon.

So, my question now becomes:  Why in the world is this placed called Shake Shack?  I would think that if your business has the word “shake” in it, you better be serving up some amazing shakes.  I understand Concrete Shack doesn’t quite have that nice ring to it, but Shake Shack’s nomenclature misled me into thinking their shakes were the highlight of their eatery.  Maybe they should rename the joint Concrete Castle…

I have yet to try the burgers or fries at Shake Shack.   I will definitely try to the next time I am there for one of those amazing concretes.  But now at least I know: skip the shake.