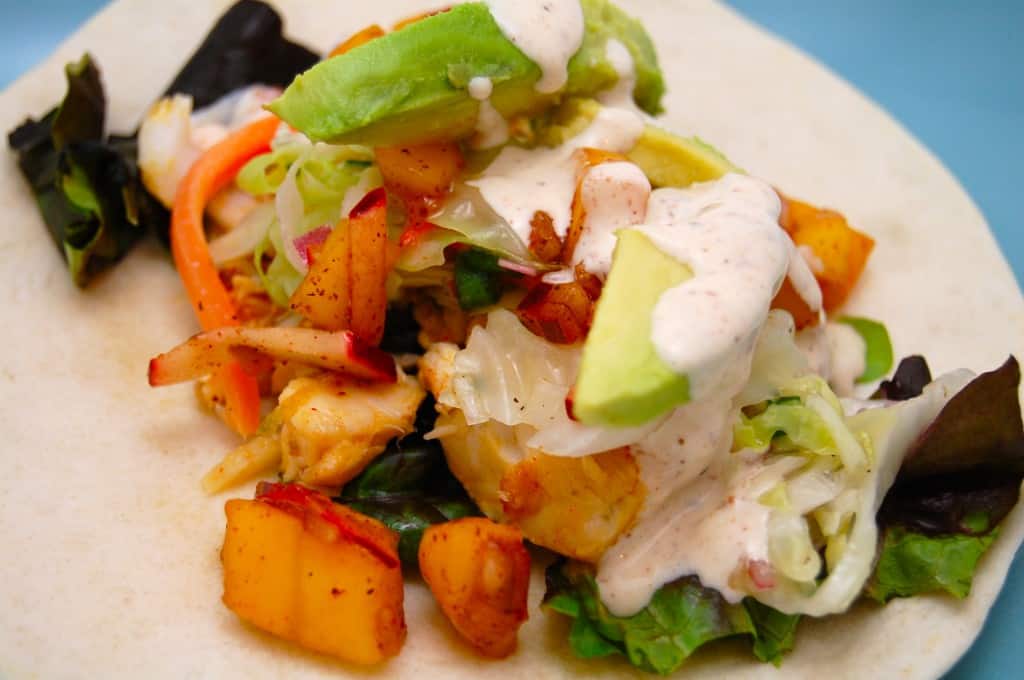 I have been on a big taco kick lately… probably brought on by my personal excitement for the now past Cinco de Mayo.  On the eating end, I’ve really enjoyed the tacos at Kimchi Taco Truck and Dos Toros Taqueria.  At home, I’ve been cooking up a storm of tacos (my apologies to Asheley, who has been subject to an absurd amount of taco dinners in the past couple of weeks).  One of the tacos I have been most excited about the past couple weeks are these Baja Fish Tacos, because 1) they were really really good!!! and 2) I actually cooked fish for one of the first times ever.

Let me explain… Growing up,  I never ate fish (unless you count fish sticks).  I have my father to thank for that, a wonderful man that eats pretty much nothing, especially fish (even fish sticks are a no go).  Since moving out on my own several years back, I’ve been eating fish more and more while out and about, but I frankly almost never cook it at home… and I don’t know why.  I guess we can call it brainwashing from childhood.  No fish at home, no fish at home, no fish at home!  Anyway, I made a decision to start cooking with these creatures of the sea, and I figured fish tacos would be a perfect place to start.

These fish tacos are bursting with fresh, bold flavors.  Even better, you can make this no problem on a weeknight.  It all comes together within about an hour… 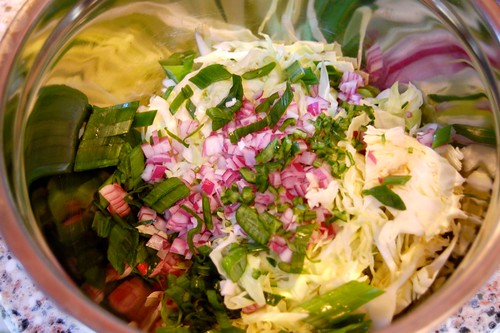 The cabbage slaw adds a real nice acidic kick and crunch to the taco.  It’s a piece of cake to get going:  1/2 head shredded savoy cabbage, 1/4 cup minced red onion, 3 chopped scallions, 1 minced jalapeno or serrano chile, 2 tablespoons of sugar,  about 1/4 – 1/2 cup apple cider vinegar, 1/4 cup canola oil, and some salt/pepper. I sometimes like to add in some shredded carrots if I have them lying around.  Mix it all up and you get: 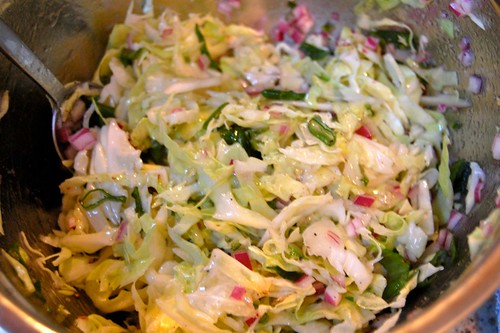 If you are planning on using the cabbage slaw within an hour, leave it at room temperature.  If letting it sit for longer, stick it in the fridge.

Personally, I always tend to gravitate to creamy slaws, but this acidic/vinegary one really works well in the taco.  Asheley, who is such a slaw snob (she only likes 1 slaw in the world, which is at Blue Smoke BBQ in NYC), even liked the cabbage slaw!  If I can make her happy, that’s a win in my book. 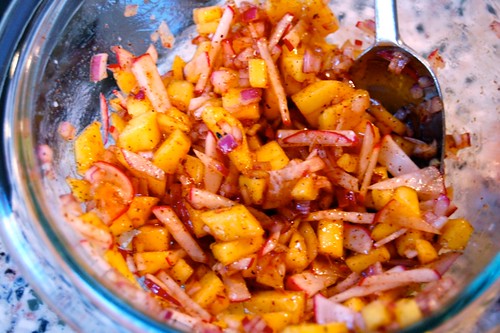 The mango-radish salsa adds sweetness, a bit of heat, and some more crunch.  Again, it’s pretty simple to whip up:  Peel the skin off and dice one mango, cut 4-5 radishes into thin slices, then slice into thin matchsticks, 1/8 cup finely minced red onion, juice 1 lime, one teaspoon of chili powder, one tablespoon of oil, and some salt and pepper. 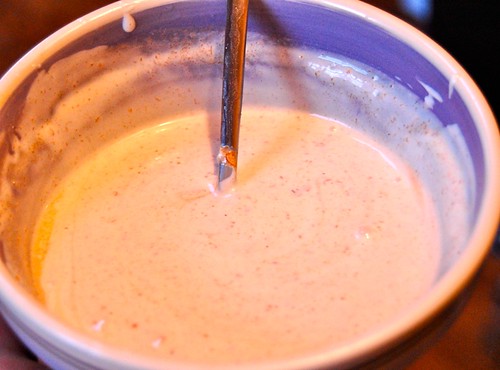 This chipotle cream adds that bit of creaminess that kind of binds the whole taco together.  Puree one chipotle plus 1 teaspoon of the adobo sauce in a food processor.  Add in 1/2 cup of sour cream, 1/4 – 1/3 cup. mayonnaise, 1/2 juiced lime, and some salt/pepper and you’re done! 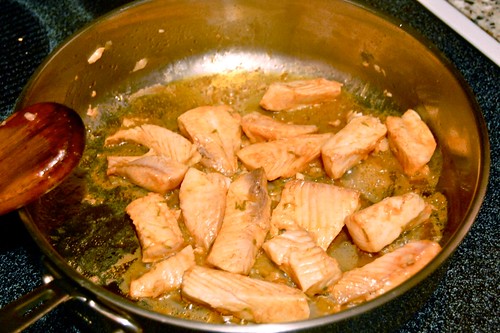 I used tilapia for my tacos, but cod or halibut would also be a good choice I think (not like I’ve ever cooked those before, but I’ve heard those types of fish work well in tacos).  You can marinate the fish for as little as one hour, but you can definitely let it marinate for a few more.  Just cut up 1 pound of fish into 1 inch pieces, add in the zest and juice of 1 lime, 1/2 teaspoon pimenton (Spanish paprkia), 2 smashed garlic cloves, 1/4 cup of oil, and season with salt.  Store in fridge until ready to cook.

When ready to cook, put a tablespoon of oil in a saute pan over medium heat.  When hot, cook the fish for just a couple minutes on each side… it cooks fast!

Meanwhile, wrap your tortillas in aluminum foil and warm in a 350° oven.  Personally, Asheley and I prefer flour tortillas, but for all your corn tortilla lovers… go for it!  Just remember for corn tortillas you are going to want 2 tortillas per taco.  Why you ask?  Corn tortillas are more prone to ripping and falling apart, so the extra tortilla adds some stability and gives it a better ratio of tortilla to filling. 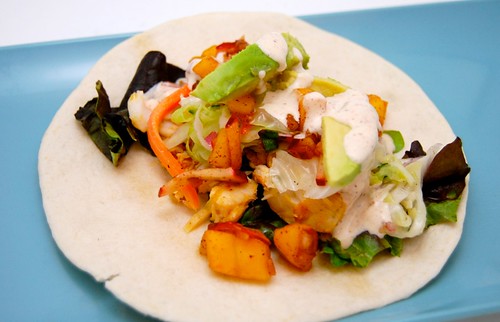 For the Cabbage Slaw: 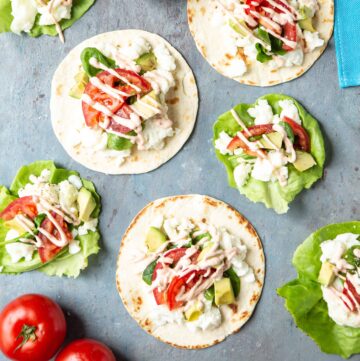 This website uses cookies to ensure you get the best experience on our site and to provide a comment feature. To analyze our traffic, we use basic Google Analytics implementation with anonymized data. If you continue without changing your settings, we'll assume that you are happy to receive all cookies on the Public website. To understand more about how we use cookies, or for information on how to change your cookie settings, please see our Privacy Policy.OkPrivacy policy